What is IPTV and How Does IPTV Works?

IPTV has become extremely popular over the passage of time that has made traditional television sets outdated in the market. Any individual can watch their favorite television shows on the laptops, personal computers and mobile devices with the help of an internet connection. There is a growing demand of such platforms in the market that would easily replace the televisions at home.

IPTV is a very simple platform that streams your favorite content through an internet connection instead of receiving TV programs as broadcast signals through a cable or satellite dish. The content that is played through an internet connection can be played and downloaded both at the same time almost simultaneously. The user can watch the program either on a computer or mobile device or with a set top box.
We have a Purple IPTV platform which delivers videos on demand, web series, live tv, television shows and movies for it’s users with several added features. We only provide the software and not the content that is being streamed on the IPTV as the content is provided only by the IPTV provider. We offer applications on the different platforms like the Android Devices, Firestick, Roku, IOS, Apple TV, Windows OS, Mac OS Etc. We are providing seamless solutions for the IPTV software for your IPTV business with your own branding. 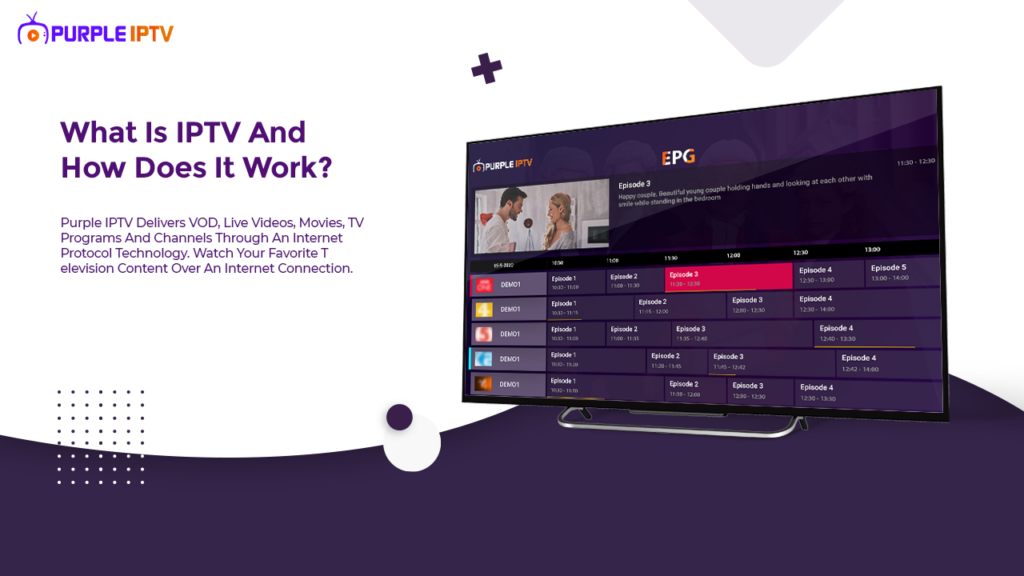 IPTV is referred as the Internet based Protocol Television where the internet is used for the purpose of delivering videos on demand, live videos, movies, TV programs or channels. It is a system through which the digital television service is delivered to the subscriber through the internet protocol technology. It means watching the television content with the help of an internet connection instead of a cable connection that needs to be paid.

IPTV is very similar to internet browsing and does not require any traditional surfing through the TV channels. It is a system that uses an internet protocol for the delivery of the videos with only fewer clicks on any TV program can request the video over the internet. Video servers transmit programs through fiber-optic cable to existing household via internet connection and requests are sent out and shows are sent back.
If any user want to set up an IPTV system at home without having a smart TV requires a wireless internet connection, USB dongle stick or router, set top box for converting the IPTV signals into TV friendly signals which makes the other digital devices to get an access tot he IPTV directly. This method of content delivery system over the internet using a well managed network such as set top box needs a broadband connection for streaming.

What We Deliver via Purple IPTV?

We offer the rebranding of your application with end to end digital one solution. The Purple Player have many smart features like the parental control, multi screen system, in-built VPN, Recording, Multi-profile, P2P and many more other features. Purple IPTV is unique as it simplifies the human efforts and creates a great user experience. The Purple IPTV is designed and developed that includes the following features:

IPTV Player for Mobile and Tablet

IPTV Player application is a free solution for IPTV, VOD, EPG, Video series which plays directly on the android mobile. This application have features of M3u Playlist Supported and Xtream API Supported.

VOD player provides options to play content with subtitle and plays on all the devices.

How does IPTV work?

After that we have discussed in detail that what is IPTV next we must know that how IPTV works. Unlike those traditional TV, IPTV works with an IP network delivering audio and video content to the users. We shall discuss in elaboration that how IPTV system works and how does the content gets streamed on the IPTV platform:

To keep things simple, here’s a step by step overview of how IPTV works:
(1) Storing programs
The live programs work like the traditional TV as they get streamed after being produced. Any pre recorded programs or movies requires storage feature in order to stream on demand. The number of available programs is usually limited by the content providers as they want to preserve bandwidth of their service.
(2) Preparing programs
All the programs whether they are running live or pre-recorded must be converted into a digital format that can travel over the internet. The videos must be compressed in order to avoid buffering while streaming of the content. Any information must be encrypted to prevent any unauthorized access.
(3) Streaming programs
IPTV programming is initiated through a temporary link between the two computers where one can receive information from the other. The user receives data from an IPTV service provider who sends information to other clients which is known as unicasting.
(4) IP multicasting
The IPTV provides solution to avoid the situations of poor user experience caused due to delay and buffering of the videos. The server gets loaded due to the heavy demand of the clients which can be resolved through IP multicasting which helps in avoiding the situation of heavy loading of the servers. Each packet leaves the server once while traveling to many different client destinations at the same time.
(5) IPTV protocols
When you stream a program you are downloading bits of the file at a time and while it gets played you are downloading next part of the file so that it gets already ready to play. This works via real-time protocol (RTP) and real-time streaming protocol (RTSP), not the standard web-based protocols for downloading (HTTP and FTP).
(6) Managed networks
IPTV providers uses the managed networks they can control to ensure the quality of the service. This involves a hierarchical network where the main office feeds into the regional video hub offices. These video hub offices then provides service to the local distribution offices that links the set top boxes in people’s homes.

IPTV + VOD
The most common type of IPTV is the video on demand that refers to the content that subscribers can watch as per their convenience. Whenever someone wants to watch a certain program under a particular title he needs to just open the app on their phone, TV, computer select the program and watch it after waiting for few seconds.


Live IPTV streaming
Watching Live television program through IPTV is known as IP simulcasting which is commonly used for the news programming and live watching of sport events. This viewing experience is very similar to watching live broadcasts on the traditional TV.
Time-shifted IPTV
Time-shifted IPTV is like the video on demand with a catch. Instead of being available indefinitely, time-shifted IPTV programs usually have a not-so-distant expiration date. That’s because the most common use case for this type of IPTV is allowing viewers to catch up on recently aired programming — like the news.

Why IPTV is So Popular?

IPTV is an increasingly popular platform as it’s online content consumption rate is very high. The IPTV service providers bundles the packages and reduces the prices that helps the customer base to grow in the market. The IPTV is the need of the telecom companies which has a rising demand in the IPTV service to offer integrated services to the consumers with affordable internet packages.
IPTV allows the telecom industries to have more specialized telecom providers who can add services without contributing to any additional cost or complexity to their operations. IPTV allows providers to deliver new services without the burden of investing heavily in additional network infrastructures. Watching the favorite TV shows has become very easy, affordable and convenient for the users which allows the market to grow and prosper.

OTT stands for the Over the Top platform that provides content over the internet instead of cable or satellite. While IPTV (Internet Protocol Television) uses the Internet technology to deliver the TV programs “on demand.”
These are some of the differences between IPTV and OTT :-
(1)Content delivery and network
The video on the OTT platform is delivered mainly through an open network and the content delivered through IPTV is distributed through a closed and optimized network through a specific ISP. IPTV is a reliable platform that ensures high quality service with easy monitoring system but much expensive and complex to deploy and manage in comparison to OTT.
(2)Components needed
IPTV requires three main components such as a router, set top box and an IP-based connected TV to display the content. While an OTT requires an internet compatible device without which the content cannot be streamed.
(3)Quality of the video
The video quality on the OTT platform depends upon the internet connection and the device that we are using currently. While in IPTV a higher resolution image with a better audio quality shall be delivered with the private content delivery network to reach the IP addresses.
(4)Type of content
IPTV services typically provide an Electronic Program Guide (EPG), an on-screen guide of scheduled TV programming. Likewise, they may include three different content-type flavors: live linear television, some time-shifted television to replay a show (catch-up TV) or start it over, and VOD, including recorded channels and programs to watch on-demand.
IPTV offers an Electronic Program Guide (EPG) which provides an on screen guide of the scheduled TV programming. It offers a live linear television, some time shifted television and VOD which is used for watching the recorded programs on demand. While in OTT the viewers are provided with a VOD list to choose from that caters to a larger audience.
Software
Older Post Purple DNS – Cyber Security Solution
Newer Post Why Opt For IPTV For Hotel Industry ?

What is IPTV App Rebranding?

Reasons Why You Choose IPTV Over Cable TV?